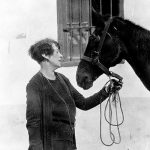 The installation of the plaque to Dorothy Brooke (founder of the Old Warhorse Hospital in Cairo in the 1930s, later renamed as the Brooke Hospital for Animals) will go ahead on  15 October  when it will be placed outside her home, Malmesbury House in the Close, which acted as the initial headquarters of the charity. However due to Covid-19 restrictions there will be no unveiling ceremony or refreshments available.

Dorothy Gibson-Craig was born in Scotland in 1883. She had loved horses since childhood and was an accomplished horsewoman. The defining moment in her life came when she arrived in Cairo in 1930, the wife of British cavalry officer Brigadier Geoffrey Brooke. From this moment her life became dedicated to the welfare of working horses and donkeys and, despite many obstacles and objections, her determination to make a difference ensured that the original Old War Horse Memorial Hospital was founded in 1934. Dorothy continued to work for her charity until her death in 1955.