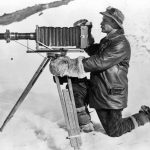 The installation of the plaque marking the birthplace of Herbert George Ponting will go ahead at 21 Oatmeal Row in Salisbury’s Market Place on 25 November.  However, due to the current Covid-19 restrictions there will be no unveiling ceremony or refreshments.

Born in 1870, the son of a bank manager, Herbert eventually chose photography as a career. His work was published in several magazines He photographed and reported on the Russo-Japanese war in the early 20th century and travelled extensively round the far east. He was elected a Fellow of the Royal Geographic Society and selected as the official photographer for Captain Scott’s second expedition. In Antarctica his photographs and short video films depicted not only members of the expedition but also pictures of killer whales, seals and penguins. After the deaths of Scott and his companions Ponting’s photographs became a memorial to the expedition.  In the 1920s he made two films, The Great White Silence and Ninety Degrees South and lectured on the Antarctic. He died in 1935.

Note:  The screening of Herbert Ponting’s film – The Great White Silence, a fascinating view of Antarctica from over 100 years ago, will still go ahead  at St John’s Place on Saturday 28 November at 6.30pm