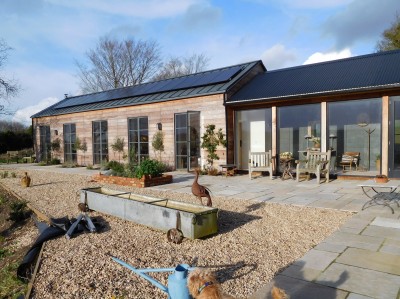 This building looked interesting in the photos seen by the judges in their initial session, but a site visit was needed to bring out its full merits. The project started from two outbuildings, one a barn and one the eponymous apple house, both of them of some visual merit but difficult to re-use effectively, and recreated them in a form which retained their footprint and much of their appearance, while turning them into an extremely attractive house. The contrasts in shape and orientation, and between cladding in timber for the apple house and in metal for the barn, produced something which was interesting from the outset, but which needed high quality design to bring out its full potential. The judges had no doubt that this had been achieved. Respect for original form did not preclude the addition of substantial areas of glazing, which created very usable ground floor spaces, while bedrooms had been tucked into an upper floor in the barn without compromising its character. The imagination shown in re-using original features in the interior, and adding new details, was applauded as going well beyond the norm. The energy rating achieved was also commendably high, with solar panels on the roof blending in very well, and full advantage had been taken of the high level position and views southwards. The overall outcome was a house which it would be hard not to enjoy living in.