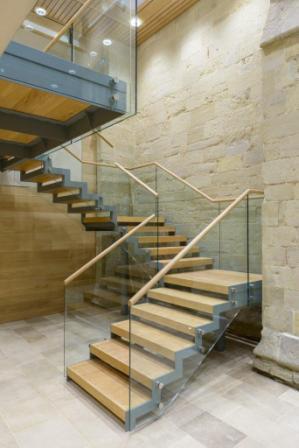 Of all the projects looked at, the judges agreed that the Little Paradise development presented the most challenging brief. Much-needed facilities had been created by filling in the space between the south transept and the Chapter House, an area not in the normal way viewed by the public, and used over the years for various temporary facilities, but nevertheless one which prior to this scheme had maintained a ground plan unchanged since the 13th century. The judges applauded the way that care had been taken to make the infilling as subservient as possible to the medieval fabric on three sides, with buttresses to either side left unobstructed, and the door in the new eastern-facing wall hidden within an angled offset.

The wall itself had been designed and constructed to a high standard, its stonework reflecting that of the adjacent vestry. The public areas, accessed from the cloisters, also displayed high-quality materials and workmanship, with a clear expression of the underlying aim to sit as lightly as possible within the surrounding medieval walls, which were obscured only where it was unavoidable. The judges felt that the addition of an upper storey, while clearly understandable in terms of the additional facilities made possible, had added to the external impact from the east in a slightly uncomfortable way, but that generally a tricky project had been carried out to very high standards.