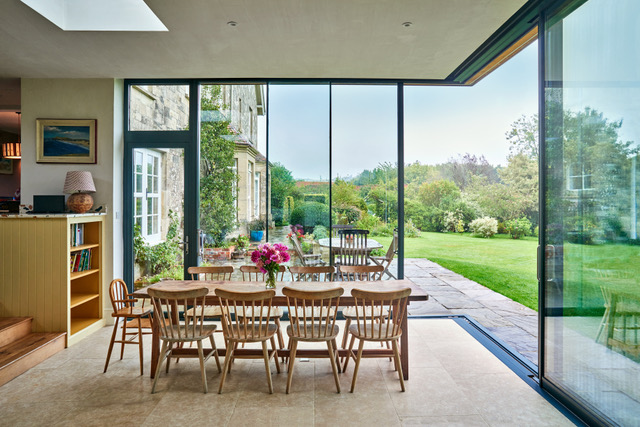 Summerleaze is a C19th stone house of some quality, though not listed. It enjoys splendid views to the south, but these were not being fully taken advantage of. It had been decided to remedy this by moving a greenhouse at the SW corner of the building elsewhere, and use the space freed up to construct a single storey garden room. This is linked to a former studio at the W end of the house, and the wall between studio and original kitchen has been removed. The result is that space previously taken up by kitchen, studio and conservatory has been unified, enabling a very substantial combined kitchen, dining and sitting area. The latter is within the new garden room building, and has stunning views across the surrounding countryside. The building’s eastern and southern walls are fully glazed, utilising very large pieces of glass which can be slid back in good weather, making the garden room truly one with the garden. A pier of traditional stonework at its SW corner anchors the new building to the rest of the house, while the rest of it has a contemporary finish, making a good contrast. The transformation of this part of the building was very impressive, and had clearly created a wonderful asset for those using the house. The judges had no difficulty in deciding that an award was the appropriate response.