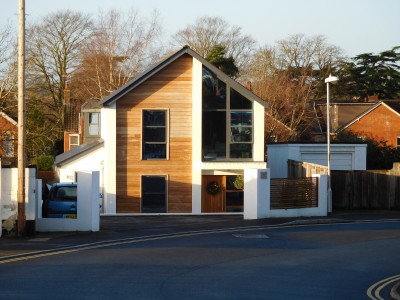 There were various reasons why the judges felt this house deserved an award, but its achievement is best summed up when viewed from halfway up Devonshire Road. To either side are standard suburban-type houses of the 1930s or thereabouts, pleasant but unremarkable, and then in the focal position at the end, as the road turns, is something quite untypical of Salisbury, but with a remarkably uplifting effect. Its combination of timber boarding, white render and plenty of glass, set within a traditional gabled shape, adds a whole new element to the street scene, refreshing without in any way jarring. The judges were particularly impressed by the contrast with what photos showed to have been the utterly undistinguished house originally on the site, parts of which survive within the structure of what is essentially a new one. The other elevations worked equally well, embodying a simple and clean approach, contemporary without in any way being over-ambitious for the location. The fact that the house was at least in part a self-build project added to its merits, and its overall impact, an extremely pleasant surprise in this quiet corner of the city, was adjudged to be outstandingly successful. Given what tends to be the usual approach, which is the bland re-creation of historic styles lacking in any conviction, others looking to design houses in similar types of locations could learn a lot from the example of this one.