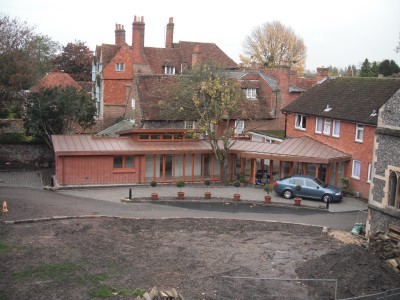 This extension was considered to be best treated as a new building in its own right, and to be appraised in terms of its own success and its contributions to its surroundings, rather than specifically in relation to the rather ordinary 1960s house to which it has been added. The judges were impressed by the fact that while its purpose is to serve the needs of a small monastic community, full account had been taken in the design of the possibility that at some point in the future it might move to a purely domestic function. This did not detract from its success in providing spaces for prayer and contemplation, and for library use, simply but distinctively detailed. Its overall form created a contemporary equivalent of the traditional monastic cloister, aided by ample glazing and copper roofs, in themselves largely out of sight but given visual expression by being carried over into the fascias. Floors paved in limestone were another indication of the use of high quality materials. The judges overall view was that the extension had been conceived, detailed and constructed to high standards, and fully deserved a commendation.