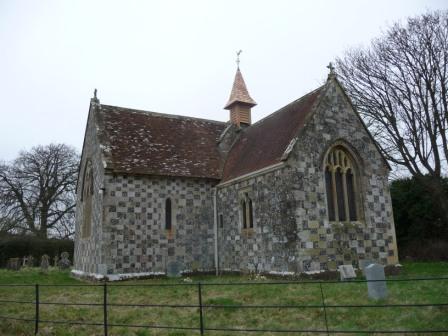 The church at Little Langford, while small and unassuming, is one that repays the slight detour from the back road along the Wylye valley needed to reach it. Viewed from that road or very briefly from the railway line close by, the bellcote is one of its most distinctive features, though not one with a constant design; its shape at the outset of this project differed somewhat from that seen in an early photo.

Given this history of change, and recorded rebuildings in 1965 and 1988, the need for further intervention occasioned by timber decay was seen as an opportunity to reconsider how the bellcote ought to look. The resultant design, with an even and generally reduced overhang compared to the predecessor structure, oak replacing softwood, and cedar shingles replacing asphalt tiles, was seen by the judges as a sensibly considered response to the situation, and one with greater longevity which should reduce maintenance obligations in the future.

The decision to award a commendation recognises that the outcome provides a fitting home for the C17th bell which the church possesses, and should ensure that the building maintains its distinctive visual contribution to this corner of the Wylye valley for many years to come.