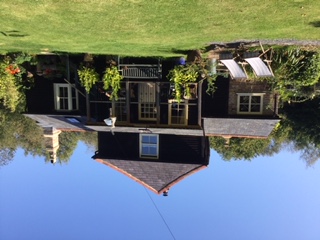 The judges were slightly disappointed that pressures on time prevented a visit to Harewarren Cottage, as the photographic evidence which indicated that it was an obvious award winner also made it clear that a visit would be very enjoyable. Not far from Wilton House, but in a very isolated location in the woods south of the house, the cottage had originally housed gamekeepers, and kept that function till at least the 1930s. Subsequently it fell on hard times, and by the time the current owners leased it from the Wilton estate it was derelict and badly vandalised. The work that had been put in to rescue it from this state was very impressive. Basically of timber frame construction, no attempt had been made to change its form, or extend it. It therefore retains its original and very attractive appearance, as a building which sits naturally in its woodland clearing. Internally, the cottage had been transformed, from something debris-strewn and uninhabitable to a clearly much loved house. Original features, including some fittings which predated the cottage’s origins in c.1844 and had clearly been recycled from other estate buildings, were kept and upgraded, with only modern building regulations requiring some loss of lath and plaster, to enable the building to be fully insulated. The amount of work which had been put in, mostly by the owners themselves, and the obvious evidence of total commitment to the project, meant that little discussion was needed before an award was conferred.